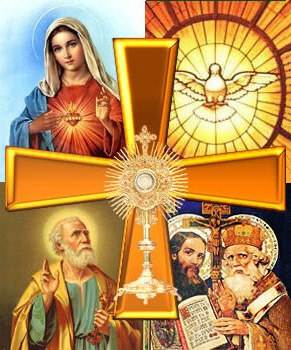 There are references about the relation of II. Vatican council to the tradition in the Vatican II documents. In the constitution Dei Verbum, par. 21 (DV 21): „The Church has always venerated the divine Scriptures just as she venerates the body of the Lord, since, especially in the sacred liturgy, she unceasingly receives and offers to the faithful the bread of life from the table both of God’s word and of Christ’s body. She has always maintained them, and continues to do so, together with sacred tradition, as the supreme rule of faith…“ 1

Als, in the constitution about the liturgy Sacrosanctum Concilium in the paragraph 4 (SC4): „in faithful obedience to tradition, the sacred Council declares that holy Mother Church holds all lawfully acknowledged rites to be of equal right and dignity; that she wishes to preserve them in the future and to foster them in every way. The Council also desires that, where necessary, the rites be revised carefully in the light of sound tradition, and that they be given new vigor to meet the circumstances and needs of modern times.“ 2

In the constitution Lumen gentium (LG 14): „This Sacred Council wishes to turn its attention firstly to the Catholic faithful. Basing itself upon Sacred Scripture and Tradition, it teaches that the Church, now sojourning on earth as an exile, is necessary for salvation.“ 3

In the Declaration on religious freedom (Dignitatis Humanae, 1): „This Vatican Council takes careful note of these desires in the minds of men. It proposes to declare them to be greatly in accord with truth and justice. To this end, it searches into the sacred tradition and doctrine of the Church-the treasury out of which the Church continually brings forth new things that are in harmony with the things that are old.“ 4

St. Pius V. in Quo Primum also declares the faithfulness to the Tradition: „Hence, We decided to entrust this work to learned men of our selection. They very carefully collated all their work with the ancient codices in Our Vatican Library and with reliable, preserved or emended codices from elsewhere. Besides this, these men consulted the works of ancient and approved authors concerning the same sacred rites; and thus they have restored the Missal itself to the original form and rite of the holy Fathers.“ 5

There was the traditional Holy Communion of the Blessed Sacrament on knees and into the mouth before the missal of Pius V. and also the during the II. Vatican Council which was adminirestered by the ordained person using the gold-coated vessels:

The cardinals Ottaviani and Bacci after founding out, that the missal of Paul VI. is introducing the changes which are breaking-up with the tradition were lead to write the Short Critical Study on the New Order of Mass dated on the Feast of Corpus Christi 5.6.1969.6 They protested against the development after Second Vatican Council.

The misal of Paul VI. is in contradiction with the SC4, namely „revised carefully in the light of sound tradition“. There also happened the violation of SC 4 in preserving and fostering all lawfully acknowledged rites such as the rite according the missal of Pius V, because in the present days this holy mass is scarcely celebrated. There happened the diversion from the Tradition and its contradiction: „Nowadays is everything different than it used to be“. This fact leads to various reactions. They involve also the denial of the council texts in the name of the Tradition. Yet this is the grist to the mill of those, who accuse the traditional catholics that they are not willing to accept the Vatican II. However, at the same time they forget to examine their conscience to what extent they themselves accepted the quotes about the tradition, such as DV 21 and SC 4. We read nowhere in the council texts: „Let´s break-up with the tradition and let´s create a new modernistic faith for the present world.“

If some quotes in the Vatican II. texts leads to the contradiction of the Tradition because of its ambiguity, it is necessary to correct these quotes by the interpretation in the light of the traditional magisterium of the Church.

There is a horifying example of the communion on hand during the World Youth Day in Rio de Janeiro in 2013 as the example of the break-up with the Tradition. What the persons without the liturgical vestments perform there with the plastic cups, it is definitely not the command of II. vatican Council:

modernistic communion (in no way the Holy Communion)

The prayer of the Angel in Fatima: „Most Holy Trinity – Father, Son and Holy Spirit- I adore Thee profoundly. I offer Thee the most precious Body, Blood, Soul and Divinity of Jesus Christ, present in all the tabernacles of the world, in reparation for the outrages, sacrileges, and indifferences whereby He is offended. And through the infinite merits of His Most Sacred Heart and the Immaculate Heart of Mary, I beg of Thee the conversion of poor sinners.“ 7